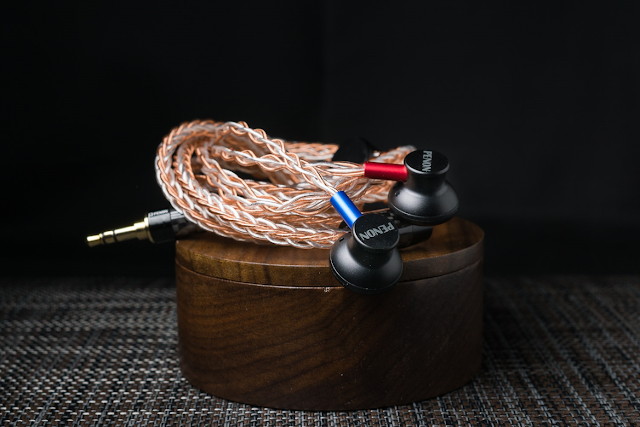 Come with many accessories. I especially like the beautiful wooden storage case made of dark brown walnut wood.

Gorgeous hybrid silver & copper octa-conductor cable that is much more flexible than it looks like although not to the same extent as twisted/braided triple- or quad-conductor cables. Lush flamboyance with elements made of carbon fibre.

Easy to see side markers.

Microphonics barely there due to the good cable that is rather heavy and on the thicker side though, wherefore the earbuds won't fit as securely as others when one's in motion.

As usual with earbuds, the sound one will hear is strongly dependant on one’s personal ear anatomy and especially how well the earbuds seal and how tight they fit.

I didn’t use any foam covers for listening.

Foam covers versus no foam covers – that is the question… that you will have to answer for yourself. Speaking for myself, I generally prefer to use earbuds without any foam covers, and that’s also how I evaluated the BS1 Official.

Starting with the bass, the BS1 Official have quite surprising sub extension for earbud levels and manage to still reproduce a bit of that rumble around 40 Hz.
Bass elevation starts around 800 Hz and reaches its climax around 150 Hz. It can be kept upright until about 60 Hz and rolls off below that. Of course, extension and quantity will highly depend on the seal, and I'm rather lucky with my large ears.
As a result of the warmth-driven tuning, lows and deep male voices gain some warmth and fullness, however bloating and unnaturalness are avoided and the midrange is not overshadowed by much, although I wouldn’t mind a just bit less fundamental range bleed into the lower midrange for this price. The bass has got a nice punch and impact to it without being really overdone or omnipresent (lows are elevated by ca. 7 dB compared to an in-ear that is diffuse-field flat in the lows, such as the Etymotic ER4SR/ER-4S).

Voices are on the smoother, warmer side but sound mostly natural. Still, the lower midrange can be a little too full at times.

The treble in general takes a slight step back and is overall slightly more on the inoffensive and smoother side. What’s quite remarkable about it is that it is mostly quite even, without any sudden dips or peaks.
Extension past 10 kHz is really good.

Bass is a bit more on the softer, looser side, but has got good control and texture. In terms of control and texture, the BS1 Official are slightly better than the BS1 Experience Version, however also a bit softer (I'd have expected slightly more bass tightness for the price).

Midrange resolution, definition and speech intelligibility are on a good level as well, however this area is ultimately slightly behind that of the Shozy Cygnus.

Treble details are certainly there and also rather precise, although one should definitely not expect better in-ear performance – but that’s what most earbud lovers are aware of anyway, and other good earbuds aren’t significantly better in this area either.

Coherency between the lows, mids and highs is, not much surprisingly, good and no area seems to really fall behind the others.

What one might notice is that the BS1 Official don’t have the most prominent forward projection. While there is some spatial depth, layering and real depth are somewhat less present. Instead, the BS1 Official concentrate more on the lateral presentation, presenting a rather wide but not super wide soundstage that will never appear congested and that slightly leaves the base between my ears wherefore it is not the most immersive soundstage for earbud standards, however not the smallest either and presents a good medium (perhaps even a bit more than just that).

Separation and placement of instruments don’t reach the same level as similarly priced in-ears or the Shozy Cygnus and appear a little smudgy in comparison, but judged by earbud-standards, the BS1 Officials’ spatial presentation is still solid. 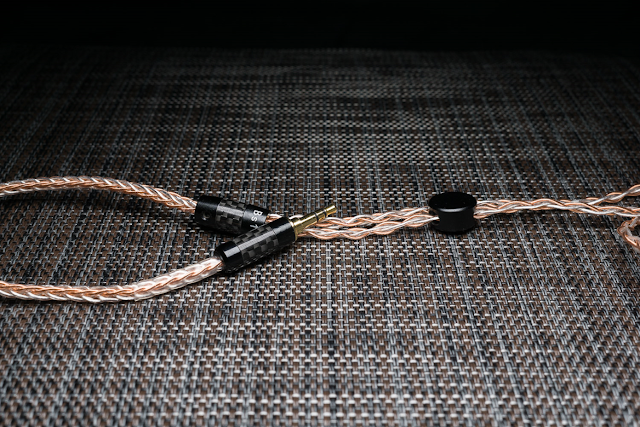 In Comparison with other Earbuds:

The BS1 Official have an even more flamboyant, gorgeous cable than the Cygnus, however at the cost of weight (and also flexibility when directly compared).
In terms of shell design and haptic, I prefer the Cygnus with their silky smooth white finish.

The BS1 Official extend deeper. Bass in general is ever so slightly more forward on the Penon as well, but the Penon earbuds are overall also audibly warmer than the Cygnus. However, while the BS1 Officials’ fullness is pleasant, their fundamental range bleeds a little too much into the midrange.
Mids are, as a result, more neutral on the Cygnus, with a more correct timbre.
The Cygnus are closer to neutral in the highs and even slightly on the brighter side around 10 kHz, and also minimally around 6 kHz wherefore treble evenness is where the BS1 Official are a bit ahead.
So the BS1 Official are smoother and a bit warmer as well as fuller sounding whereas the Cygnus have more of a tastefully balanced v-shape with more correct, more neutral mids.

Bass is tighter, faster and better controlled on the Shozy.
Midrange resolution and speech intelligibility are slightly higher on the Cygnus as well.
Treble separation is also a bit sharper and cleaner on the Cygnus.

My personal choice would be the Cygnus. They don't extend as low in the bass and are less even in the highs, although not unpleasant or unnatural in any way in the treble, but have the more correct, neutral sounding midrange, lack the moderate warmth bleed that the BS1 Official have, win in terms of resolution and spatial precision and are more ergonomic.

The BS1 Official have got a far more premium cable with the slightly higher flexibility and come with far more accessories. On the downside, the cable's on the heavier side, so less ideal for lengthy outside use in comparison.

The bass is where we have the biggest difference between the two earbuds – control and texture are higher on the BS1 Official while the BS1 Experience Version shave got a bit more tightness and speed.
Due to the higher evenness in the highs, the BS1 Official sound smoother, more even and more natural in the mids and highs in direct comparison while actual detail retrieval and speech intelligibility are quite similar.

Soundstage is, to my ears, quite similar in terms of size, openness and spatial precision/imaging between both earbuds.

In terms of tuning, I'd pick the smoother sounding, more expensive BS1 Official over the Experience Version, while both offer quite comparable resolution; the cheaper of the two in-ears is even a bit ahead when it comes to bass speed and tightness. Not an easy choice for me. Ultimately, I guess the lusher cable would ultimately be the decisive factor over the lower price. 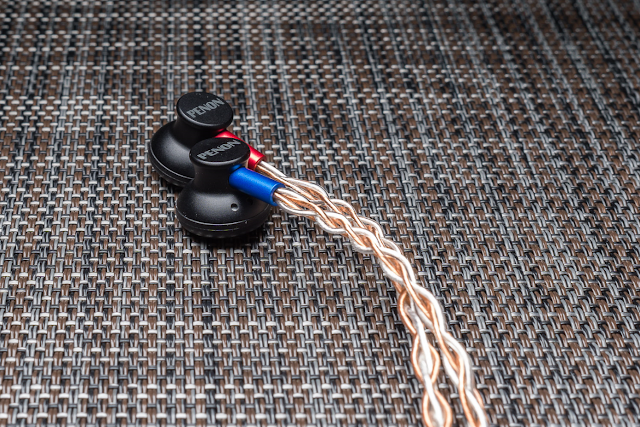